Vegetarian, vegan, plant-based, etc. diets seem much more mainstream in the media these days, and meat substitutes are no longer just a bad joke, and yet the typical American eater is the greatest carnivore in all the world, with Americans consuming more meat and other animal products (per capita) than any other country. And meat consumption continues to climb, reaching record highs every year for the last five years, though this year the coronavirus may yet put a small dent in this trend.

So, just how much meat does the average American consume? Fortunately, the USDA provides plenty of data on carcass, retail, and boneless meat supply for over 100 years. Figures 1 and 2 summarize the trends from 1909 through 2017 (excluding seafood), and we can summarize things as follows:

Meat Trends in the US 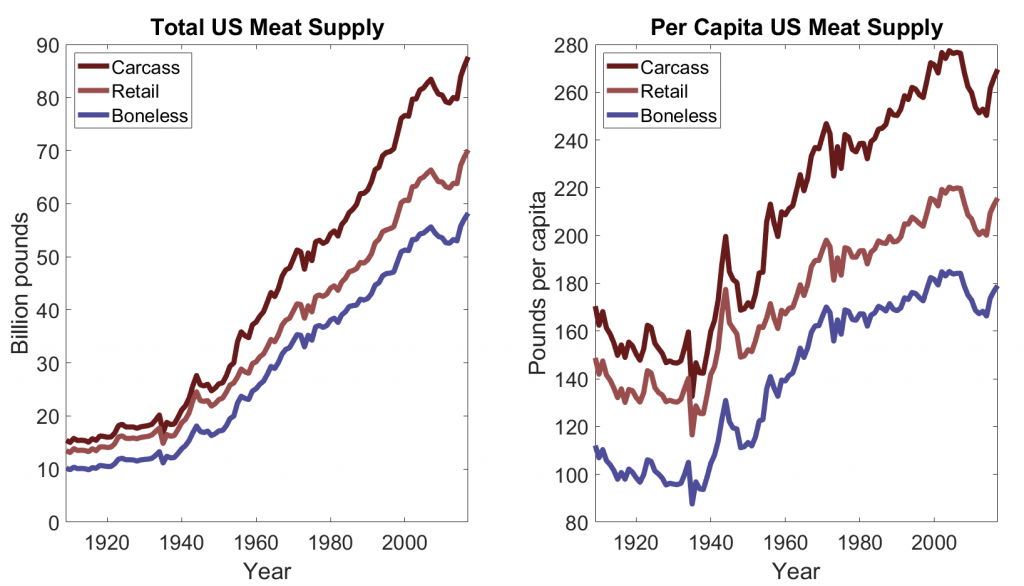 Figure 1. Trends in total meat consumption (excluding seafood) in the US from 1909 through 2017. The left gives total meat supply, in terms of either total carcass, retail, or boneless weight, with similar per capita trends on the right. Note that this dataset ends at 2017, but meat consumption continued to climb in 2018 and 2019 as well. Data from the USDA Food Availability Data System. 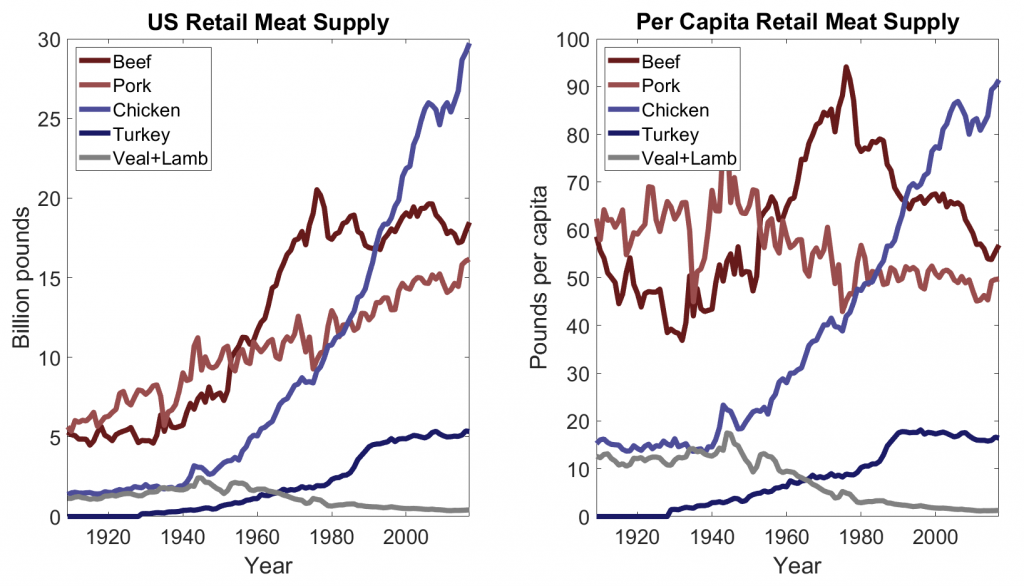 Figure 2. Trends in yearly retail meat consumption for major animals in the US from 1909 through 2017. The left and right give total and per capita consumption, respectively. Note especially the explosion in chicken, which is now America’s favorite meat. Data from the USDA Food Availability Data System.

Something to note here is the difference between live weight, carcass weight, retail weight, and boneless weight, as the unsavory business of converting a living animal to a retail product necessarily involves losses. Carcass weights are somewhere on the order of 50–70% of live weights, while final boneless weight is in turn about 60% of carcass weight. These losses are but one reason eating animals is less efficient than plants: Not only do animals convert only a fraction of the energy and protein in their feed into biomass, only a fraction of that biomass is ultimately edible.

And now, how many animals does it take to give us over 70 billion pounds of retail meat each year? The USDA’s “Livestock Slaughter” and “Poultry Slaughter” reports paint a grim picture, with the following slaughter counts for 2019:

Thus, nearly 10 billion farm animals meet their end each year to feed American appetites, with the unfortunate chicken representing just over 95% of this total. This is unsurprising considering chickens reach slaughter weight in only six weeks and weigh a bit over 6 pounds at slaughter, while cattle, for example, take around two years and weigh 1,350 lbs at slaughter. Now, divide by the US population and we arrive at about 30 farm animals per American per year, with 28 of these chickens; the math gives less than a single individual animal for any other major farm animal in a single year; Figure 3 summarizes the numbers for chicken, turkey, cow, and pig. 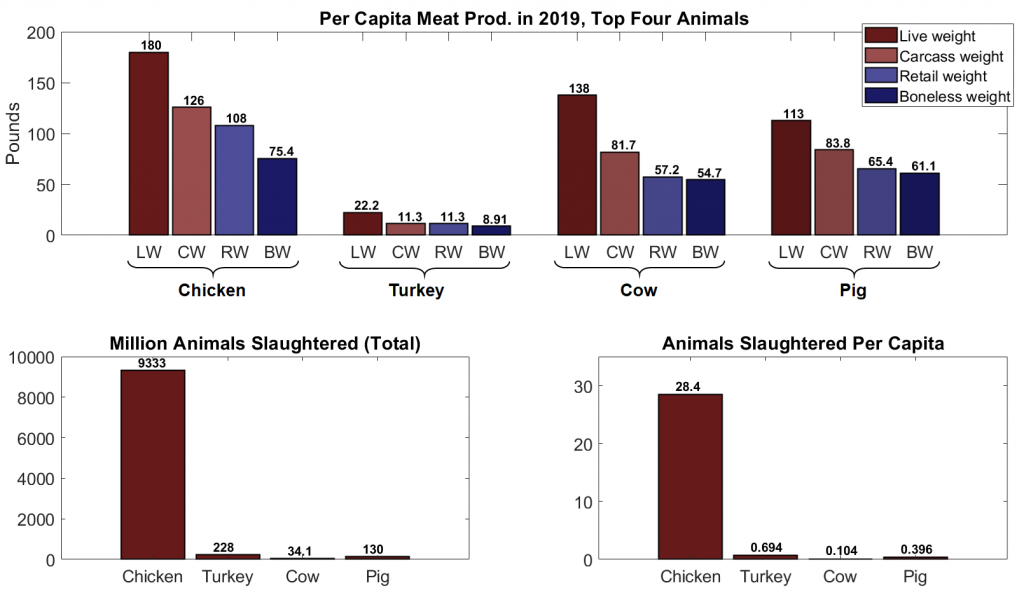 Figure 3. Per capita meat production and animal slaughter for the top four meat animals in the US. The top graph shows per capita live, carcass, retail, and boneless weights (based on live and carcass weights reported in USDA Livestock and Poultry slaughter reports, combined with retail and boneless conversion factors reported separately). The bottom figures show total (in millions) and per capita slaughter counts on an annual basis. While tens and hundreds of millions of cows, pigs, and turkeys are slaughtered, the chicken numbers are utterly overwhelming.

Figure 4. The number of terrestrial animals the average American can be expected to eat over a 78.5 year lifetime, rounded to the nearest animal, and using 2019 consumption numbers.

But now suppose we add up all the animals eaten over an average American lifetime of 78.5 years: Then (using 2019 numbers) we arrive at the sums also illustrated in Figure 4 (rounded to the nearest animal):

Okay, this is all very grim, but suppose one avoided meat on one single day of the week, a la “Meatless Mondays,” or essentially equivalently, left meat out of just three meals each week. That is, just reduce meat consumption by one seventh overall. How much slaughter could be avoided is a simple arithmetic problem, but laying out the numbers explicitly still shocks the conscience. Over a lifetime, one would spare roughly 319 chickens, 8 turkeys, 1 duck, 1 cow, and at least 4 pigs, as illustrated in Figure 5. In terms of overall yearly numbers, annual US slaughter counts would (at least in principle) fall by a remarkable: 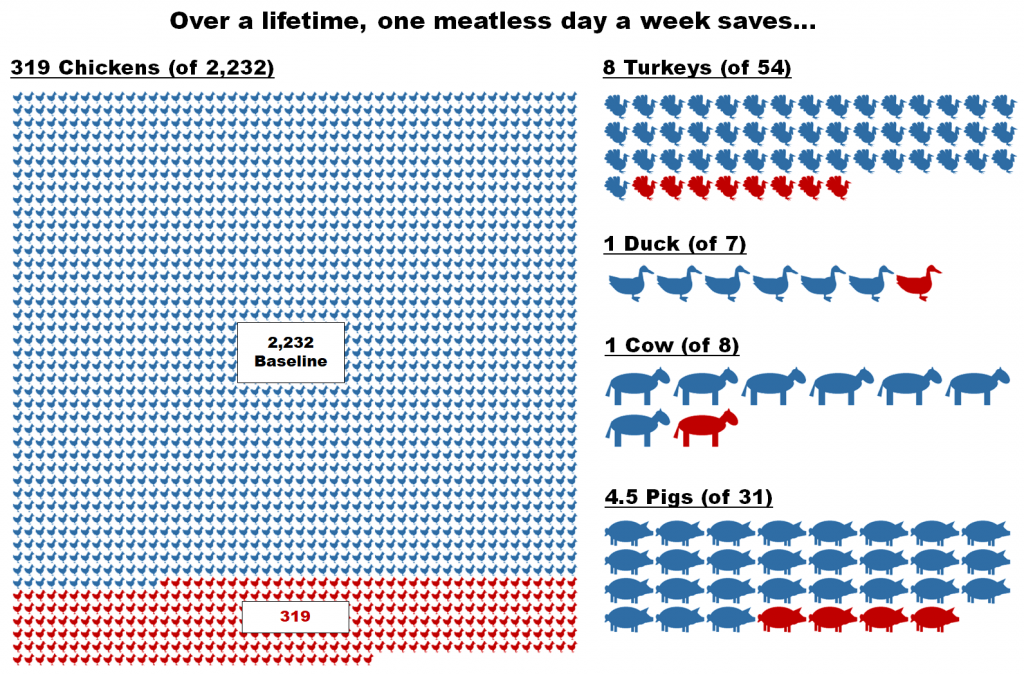 Figure 5. Graphical illustration of how many animal lives would be saved by going without meat (the equivalent of) one day a week, over a lifetime, for a typical American. Animal slaughters avoided are highlighted in red.

Of course, fully vegetarian and vegan diets are much better, but I’d also like to champion the lazy, imperfect vegetarian who slips here or there, or even makes it their practice to indulge, say, once a week. Flipping the numbers above, and having a “Meaty Monday” while abstaining the rest of the week demonstrates the enormous potential of a harm reduction approach that does not demand purity. It may always be better (in almost every sense) to consume less meat, but the gulf between a typical American diet and that of a true vegan is vast, and the great good that could come of narrowing this divide should not be dismissed.

Universal adoption of the “six-days-a-week’’ vegetarian diet would push total US meat consumption below 1909 levels, and the lifetime body counts would change dramatically as seen in Figure 6 (not that this figure contains any new information, but it remains worth emphasizing!). 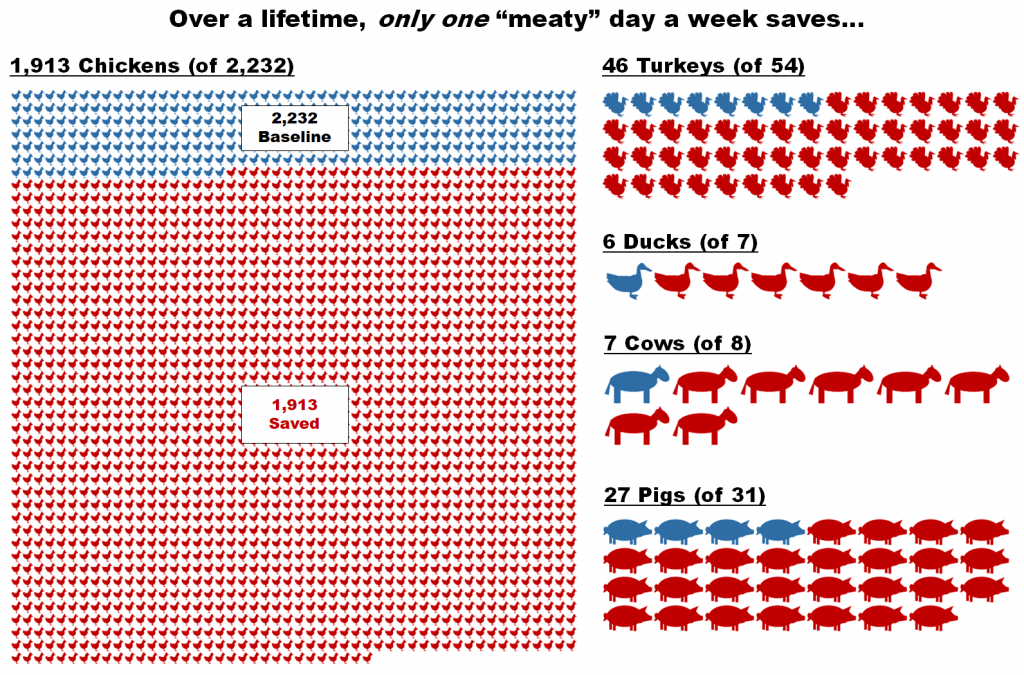 Figure 6. And now a graphical illustration of how many animal lives would be saved by switching to eating meat (the equivalent of) only one day a week, over a lifetime, for a typical American. Animal slaughters avoided are again highlighted in red.

So to sum up, America is and has been a nation of meat eaters, with the revolution in livestock, and poultry production especially, since about WWII driving the US to now consume nearly 10 billion terrestrial farm animals each year, not to mentions tens of billions of sea critters (perhaps the subject of another post!). However, by seeing the enormity of the numbers, we can also see the remarkable potential of harm reduction strategies, even if they fall short of a meatless ideal.

3 thoughts on “Just how many animals do Americans eat? And how many would you save by going meatless one day a week?”