A new analysis drawing on 570 studies with data covering 38,700 commercial farms shows dramatic variation both worldwide and within-region in the environmental impact across all major foods, but confirms that beef in particular and animal products in general are responsible for the greater part of food’s impact on earth, which adds up to 31% of global warming emissions (including non-food agriculture), and 43% of ice- and desert-free land.  Supplementary material available for free (and is very comprehensive), while the main article is for subscribers only (here).

Poore and Nemecek recently published a paper in Science that has justly received a decent amount of media attention.  This is a remarkably comprehensive work that compiled data from life cycle assessments in 570 published papers (from 2000 to 2016), to cover about 38,700 commercial farms across 119 countries.  Environmental impact was assessed across five categories:

Using data reported in Figure 1, I have re-plotted below the mean impacts of foods whose major nutritional role is to provide protein, on both a kgCO$_2$e per 100g protein and kgCO$_2$e per kg of product weight basis.  Similar plots are given for land use. 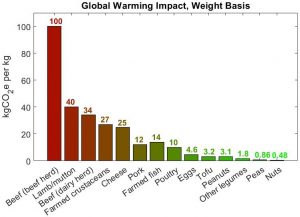 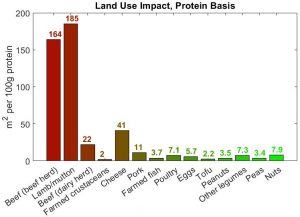 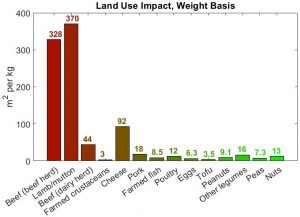 Overall, beef and farmed crustaceans (e.g. shrimp) are the highest impact, while of animal products, eggs and poultry are generally best.

Note that the above results are global averages.  The per-unit GHG impact of animal products in the intensive, industrialized production systems of America are likely to be appreciably lower, perhaps by a factor of two, but the qualitative rankings (and gross quantitative ratios) should hold for US consumers.

It is noteworthy that not only was there great variability in impacts between producers for the same product, practice changes for reducing impacts varied between producers, many practice changes were expected to have little net impact or incurred trade-offs between different axes of environmental harm.  For crop management the following broad conclusions could be drawn (see Figure S6 of the supplementary material):

For animal systems, broad conclusions include:

Excerpt on food and agriculture.