Whether 100 or 100,000, it’s consuming the fossil fuels extracted by these companies that ultimately drives climate change

A mere 100 hundred companies have generated 71% of warming emissions (based on [1]), so the refrain goes, and so changing your own habits and thinking this a meaningful response to climate change is either delusion, virtue signaling, the result of corporate propaganda, or some combination thereof. This has become the “zombie statistic” of popular climate discourse, cited almost exclusively by those that do genuinely care about the ongoing climate catastrophe, and yet ironically employed toward the utterly counterproductive ends of paralysis and inaction. While not untrue (and indeed an important element of a full understanding of climate change), the zombie nature of this factoid arises from the nihilistic implications that are typically assumed.

For before we shrug in defeat, we might pause to clarify, what are these 100 companies, and just what are they alone doing that is so damaging? Well, they are fossil fuel producers at the primary level of extraction, i.e., coal, oil, and natural gas producers. The number two villain, for example, is the state-owned Saudi oil company Aramco, but it is certainly not pumping oil for its own sake, but for export to consumers around the world. Shall I really burn away hundreds of gallons of gasoline a year in my vehicle, but protest my innocence that the Saudis who dared sell to me are to blame? More broadly, it is the consumption of fossil fuels that is the direct driver of global warming, and, while fossil extraction is clearly a necessary step in the causal chain, to blame this alone ignores the simple fact that fossil producers do not act in a vacuum.

Accounting for emissions by attributing them to primary fuel producers is one choice, but if we actually want to change the world, we are much better served with a consumption-based accounting, one that examines how consumptive acts both directly generate carbon emissions (e.g., driving, residential energy use), and indirectly drive upstream energy use/emissions in other economic sectors (e.g., vehicle manufacturing, energy for providing goods and services, etc.). Viewed through such a lens, it becomes clear that consumption by American households is the ultimate driver of nearly all US emissions.

Energy is the lifeblood of the economy, and about 70% of US economic activity is consumer spending, and so we might guess that about 70% of US emissions are attributable to consumers. More careful analyses that add up all the fuel, electricity, food, goods, services, etc. used by the “consumption supply chain,” arrive at closer to 100% of US territorial emissions [2–8], as spending on fuels such as gasoline, natural gas, and electricity is especially carbon-intensive per dollar, while some of these emissions are also “imported” from abroad. Consider a computer manufactured in China with coal-fired electricity, shipped via international freight powered by oil, stored in a warehouse lit and conditioned by electricity generated mainly by natural gas extracted via hydrofracking in the US, and finally delivered from the warehouse to customer in a diesel-powered truck. Emissions across economic sectors, fuels, and territories all contribute to the carbon footprint of this laptop, which are summarized and properly attributed to the new laptop owner under a consumption-based accounting.

The EPA’s most recent inventory of greenhouse gases gives 6.667 billion metric tons of CO₂-equivalent (CO₂e) emitted on US territory in 2018, divided into five (six, including electricity generation) major economic sectors. Now, dividing all these emissions among the US population gives just over 20 metric tons CO₂e per person, or about 50 tons per household (the average household is just over 2.5 persons). Multiple bottom-up analyses of CO₂ attributable to household consumption also arrive at around 50 tons per household (e.g., [2–8]), and so just about 100% of US territorial emissions can be attributed directly to the everyday activities of all Americans, just summed up. The flow of emissions (for the US) through fossil fuel producers, fuel type, economic sector, and finally to consumers/households is summarized in Figure 1.

Figure 1. Allocation of about 6.8 billion metric tons of CO₂e in the US under different carbon accounting. Emissions by fuel indicate the CO₂ produced via direct contribution of oil, natural gas, and coal, as well as lumped other CO₂ and non-CO₂ greenhouse gas emissions (mainly methane from agriculture and natural gas systems). Emissions by sector illustrates how fossil fuels generate electricity, which in turn contributes to all other sectors, while fossil fuels are also used directly in these sectors. Finally each economic sector contributes to various categories of household consumption. Arrow width approximates the general magnitude of each flow. Numbers for fuels and sectors are based on the US EPA Inventory of U.S. Greenhouse Gas Emissions and Sinks: 1990–2018 [1]; consumption numbers are based on results presented in A Fair Share: Doing the Math on Individual Consumption and Global Warming [2], references therein, and references [3–8].

Looking closer at household consumption (Figure 2), we can see that emissions are divided roughly evenly among: 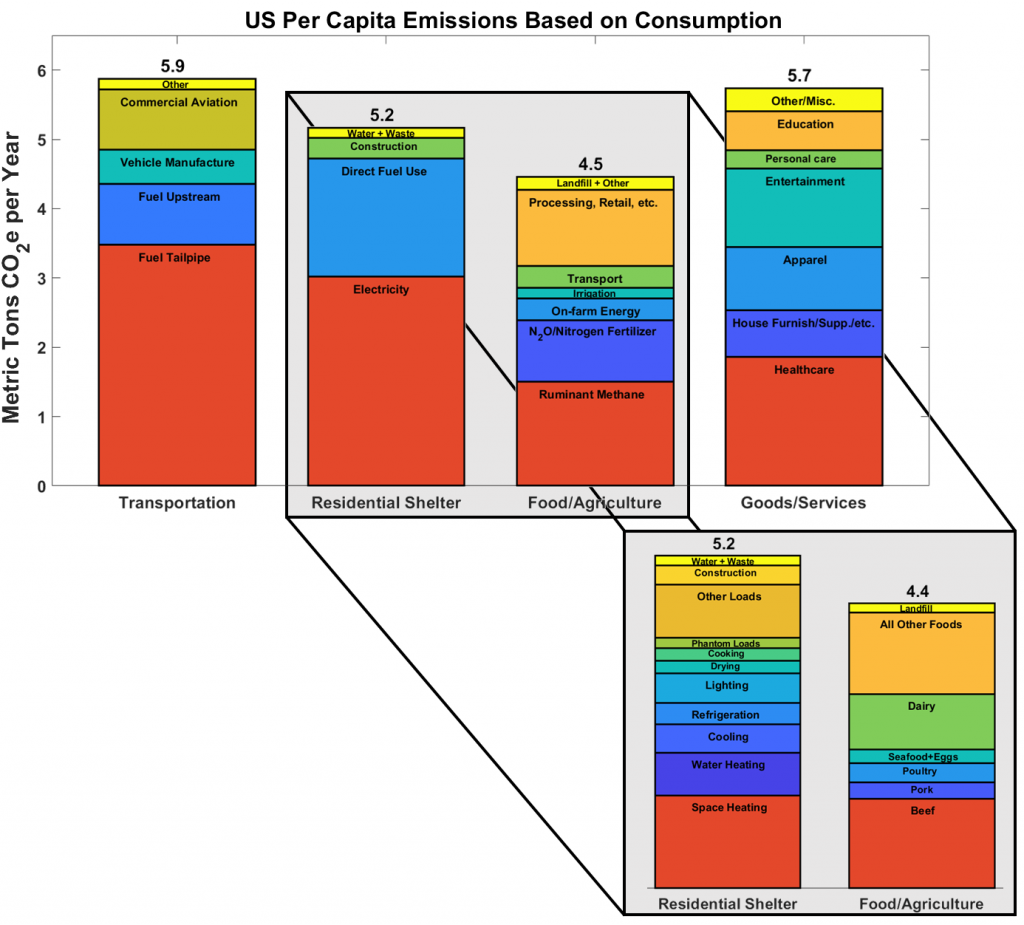 Figure 2. Approximate yearly CO₂e emissions per individual attributable to consumption, divided into different consumption categories. Residential shelter emissions are divided into either the footprint from electricity and fuel use, or by energy end-uses (pop-out); similarly, food/agriculture emissions can be tabulated on the basis of emissions mechanism or food product (note that sums vary slightly with different accounting methods). Figure based on data presented in [2].

This is all summarized more quantitatively in Figure 2. It is clear then, that it really is a motley collection of banal consumer acts that drive global warming, and that an equally banal collection of conservation measures may meaningfully mitigate emissions, as illustrated in Figure 3. These mainly amount to consuming less gasoline (whether by driving less or upgrading to a low carbon vehicle), using less household energy (or adding solar), minimizing meat and food waste in diets, and dialing back overall consumption. These changes seem so trite as to make a mockery of the enormity of climate change, yet we need simply look at the numbers to see they are desperately needed. To appeal to the “100 company fallacy,” if you will, to argue against any change would be a profound error. Deeper change to the energy system, with a complete transition to renewable, near-zero carbon sources, is also, of course, needed. But in the near-term especially, conservation is the best “renewable energy,” and can synergize with the deployment of renewables to decrease emissions.

In the light of a consumption-based accounting, it is unclear why the 100 company figure is even viewed as significant. So what? What if it was 1,000 companies? 100,000? A million? Would the basic calculus of global warming change at all as a function of the number of upstream entities involved in providing natural gas, coal, and oil to the consumers of the world? Regardless, a fundamental transition away from a fossil-based energy system is necessary, and to do that requires altering energy end-uses, whether it is households, corporations, or governments at various levels that take the initiative to transition.

Figure 3. Potential for various collections of simple consumer shifts from the average US baseline to meaningfully mitigate per capita carbon emissions, lumped as either “minimal,” “moderate,” or “ambitious” changes. The minimal shift, for example, which could spare 25% of emissions, amounts to: (1) Reduce miles driven by 20% and omit one-third of flights; (2) change the thermostat by 2°F and set it back by 3–5 °F when absent or at night in winter, change lighting to all LED, decrease hot water, general electric, and phantom electric loads by 25%; (3) cut out 50% of beef and food waste; and (4) decrease general consumer spending by 20%. The number at the top of each bar indicates total annual per capita emissions, with numbers below giving the different contributions per category. Figure based on data presented in [2].

As a final note, to see how unhelpful the 100 company statistic really is, consider any other driver of environmental harms. Just 13 car companies account for 99% of US vehicle sales. If only there were 100 car companies, then perhaps American passenger vehicles wouldn’t consume nearly 10% of the world’s oil? Or perhaps the problem is Americans’ driving habits, and their collective preference for oversize vehicles. US drivers are enabled by these few car companies, and exist in a profoundly car-oriented infrastructure, to be sure, but the consumption of oil flows ultimately from the final act, not the first.

Overconsumption of meat and animal products is increasingly recognized as an environmental harm. It would be the height of absurdity if I suggested that because a handful of vertically integrated companies dominate the US meat supply, that therefore I, and every other American, can indulge in all the meaty treats we care to eat, safe in the knowledge that it’s the wicked corporations who bear true responsibility for our profligacy.

The major corporations that enable America’s wasteful and environmentally catastrophic consumer culture are not remotely without blame, but they can’t, by and large, force us to consume their products. Demand is not inevitable, and when consumption is the final driver of the greater share of climate altering emissions, individuals cannot shirk their responsibilities by appealing to the greater corporate evil.